The Story of Scarlett's Burn

Sunday, April 11th at 1pm Scarlett climbed up on the chair in the kitchen while Kevin and I were looking at something on the computer. I had poured hot tea into my travel cup as I was about to go study for Phisiology. She reached as far as she could and managed and grabbed the edge of the cup, spilling the tea down her arm. We heard the sound of the spill followed by a blood curdling scream. She flung herself off the chair as Kevin leap under her landing on his back catching her moments before her head hit the floor.  It was like the touchdown of a big game as she was hurling head first toward the floor.

He handed her to me and I shoved her body under the cold water and began to strip off her fleece long sleeve PJs to assess how bad it was. The skin was completely gone, hanging off her arm  like candle wax, which is when I said "we need to go now". We piled into the car, dragging Ava along as she happened to be super sick with stomach pains. Kevin only ran 1 red light and we made it to urgent care in 3 minutes. They whisked us in and asked us How do you felt about Tylenol with Codeine? We said please give her all the pain meds she can safely handle. I guess some parents choose to not give the codeine, not that surprising as we are in Santa Cruz.  Within 20 minutes she fell asleep and they bandaged up her arm and showed us how to do bandage changes until they see her next week.

Scarlett had a 2nd degree burn on her forearm and was seen by the doctors from the burn unit and plastcis at Valley Medical. The moment I heard she may need surgery, my ears got all fuzzy and then I could not really hear anything else after that. Thanks goodness Kevin was there to help me hold it together. I tried to convince myself this wasn't really needed and they did not know what they were talking about, but this did not work and surgery was scheduled for the following week, 3 weeks since the actual burn. They would take skin from her bottom using a tool that resembles a cheese slicer and sew this skin on her arm.

We left Santa Cruz before sunrise arriving at the hospital super early as Scarlett could not eat or drink anything. The doctors admitted her and gave her medicine to make her loopy and it worked like magic. It is an odd sight to see your baby so high and doped up. The anesthesiologist came in and I handed her over and he carried her away.  I thought this is when I would break down and cry as this was the moment I dreaded. But it was ok, I felt she was safe and she was so doped up she did not really notice being taken away. I sat in the waiting room and tried to study for the 40 minutes she was in surgery and was soon told it was finished and went smoothly. I was able to see her when she woke up.

I was not prepared for what I saw when they brought me to her. There were so many wires and tubes and she had some bruising and scratches that happened when she woke up form the anesthesia. Which is why she was sleeping, they had to make her sedate her so she would not hurt herself. They wheeled her crib-bed to the burn unit where she would recover and spend the next 4 days. I was given a gown, gloves, and a hair net to wear the entire time I was there. She eventually woke up and they helped me hold her which was hard because of the wires and tubes. She was connected to this vaccume machine that applied a constant suction to the graft site which is the best way to heal a graft and has to be worn for the next 4 days.

The first day was super hard and monotonous. I tried to keep her busy while also keep her from walking around as she was tethered to this machine. I quickly realized that she would walk with or with out this machine, so a nurse helped me set it up on an IV stand. We then spent the next 3 days walking around the hospital, all day long. Kevin and Ava visited us which broke up the days, but overall it dragged on. That being said it was an amazing experience and brought Scarlett and I closer. I realized how lucky we were as I was told the majority of the kids that end up in the burn unit have more devastating burns, mostly on their faces and neck from pulling hot things down on themselves. The guy in the room next to us was covered head to toe in bandages. His burn was resulting from a propane explosion and it seemed as thought he was barely stable

Scarlett now wears a fitted nylon zip up arm band 24 hours a day with lots of lotion and her arm is healing well. We cant let her get sun on her arm for pretty much forever, and she will wear this arm band for at least another year, but with proper care, the scars should be barely noticeable by the time she is an adult. This experience was awful, but that being said, I feel it was a wake up call of how lucky we are and how we take it for granted having healthy children. I wanted to write this story as time seems to fade memories and this is one I dont want to forget. 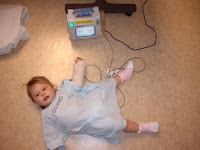 at January 04, 2011
Email ThisBlogThis!Share to TwitterShare to FacebookShare to Pinterest