I checked in at Sutter Maternity at 7:30am on April 2 to be induced. It was surreal to arrive at a scheduled time to have a baby as both my girls came when they were ready. I chose to induce one day after my due date because I was over being pregnant and I felt all my body needed was a little push.

Kevin went to drop Scarlett off at school and would wait at home with Ava until I called him to come to the hospital. These things can take all day so I figured no rush.

At 8:30am, my midwife came and said "Are you sure you want me to break your water?" To which I replied "Absolutely". She briefed me on the possible complications that can arise from inducing a labor, such as the need for pitocin if contractions dont start on their own. I was ready to get this adventure started and Leora broke my water and then gave me this awesome diaper to wear. I was dilated to 3cm which I had been for the last 2 weeks. I spent the next 10 minutes taking pictures of the coolest birthing center ever.

My best friend Louisa arrived and we hung out waiting for something to happen. My contractions became more frequent but not painful.  Around 10:00am I texted Kevin and told him to come on down as things were getting going. My contractions were starting to feel uncomfortable and I sat on a yoga ball and breathed through them.

Kevin and Ava arrived at 10:10am followed shortly after by Serena, my other best friend. Both Louisa and Serena were at Scarlett's birth. At 10:30am Maggie, my nurse checked my cervix and I was dilated to 6 cm. This is when it started to really hurt and I could not get off the bed. She called my midwife to come on over and get this party started. Leora arrive shortly after and checked me again and I was 8 to 9cm.

Ava says I was making cute sounds through my contractions. I remember it hurting so bad. I had forgotten how much labor hurts. I started to feel like I had to poo and said "I think  have to poo a little, or a lot" and then couldn't help but push. They all said no, thats not poo, thats  your baby! You see I never had the urge to push before as my first 2 babies were posterior, faced up. Babies are MUCH harder to push out when they come out like that and I pushed for 2.5 hours with Ava and 1.5 hours with Scarlett.

I was on my back, legs held back by Louisa and the nurse and they told me to go for it and push, which I did. And go figure this little girl came out in 3 pushes, hallelujah she was face down! She came out screaming, with one eye open. They put her on my tummy where she continued to wail.  Ava cut the cord like a professional cord cutter. The time was 11:12am, less than 3 hours after my water was broken, less than one hour of intense labor. I guess as far as labors go, 3rd times a charm!

She continued to cry, more like scream for an hour. It was an owie kind of cry, not the typical newborn cry. The nurse had a pediatrician come to make sure she was ok, and she couldn't find anything wrong with her. After a couple hours of intense crying she finally fell asleep. I was concerned something was hurting her but when she woke up later that day, she was not screaming anymore. I guess being born can be pretty traumatic...

We were thinking of naming her Juliette, but after seeing her and having her come into this world like a whirlwind we decided to name her Willa. Kevin picked her name which is fair because I got to name the first two. Willa is the female version of William, Kevin's fathers name who is one of the nicest people in the entire world, very deserving of a namesake. Second, a williwaw is a type of windstorm on the ocean and she arrived fast and furious like a wild wind. 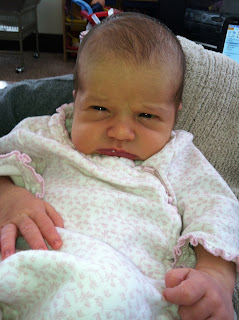 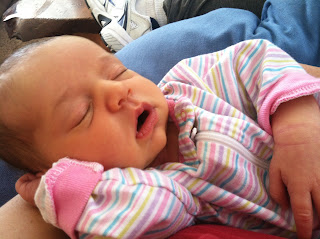