Brushing teeth in my house has turned into a very time consuming activity...
Ava - When she was little, she let me do it, now she does it, the end... 3 minutes
Scarlett - She picks her toothbrush, chooses 3 different kinds of toothpaste, then decides not to use it because she wants to use Ava's. Ava says no way, so she settles on her pink Hello Kitty. But first, she needs to put her barrettes in her hair. Then she has to poo, but I thought she only had on 5 pairs of underwear which I stripped off and set her on the potty. As she started to go, we both realized she was wearing a 6th pair which I quickly pulled off.
Finally ready to brush, but no she had to tell me this totally made-up story.
Story Goes - Kevin took her to Toys R Us and bought her a Little Mermaid dress with a real tail that goes in the water. When she got home she put it high up in the closet where the raccoons climbed up and took it in the wall. (Racoons really do live in our wall, this is the only true part of this story)  The bad guys came and beat up the raccoons to get the Aerial costume. But the raccoons became good and escaped and gave her the costume back.
After her story she finally brushed her teeth.  20 minutes
at February 19, 2012 No comments:
Email ThisBlogThis!Share to TwitterShare to FacebookShare to Pinterest

I finally convinced Kevin to let us invest in a kingsize bed. Here is my reasoning.  I am having another baby who will suck on my teets all night long while simultaneously being sandwiched from behind from by Scarlett.

(Just a side thought - back in the day I used to think being sandwiched and suckled sounded like a fricken party if you get my drift. You see how my mind thinks these days? Damn hormones are turning me into a dirtly old lady. Anyway, I will save that for another post...)

I figure I deserve more space for doing my duty of carrying these creatures, squeezing them out, and then letting them help themselves to my tatas.  Kevin also deserves more space as he is on the receiving end of Scarletts wild mid-night kicks.  She is brutal, its like she is training to me a mixed marital artist and Kevin is her punching bag.  For having her eyes closed, she has great aim, mostly Kevin's temple. She is really good at getting perfectly horizontal between our pillows.

So the glorious bed arrives and it is huge! I recommend a king size bed to families everywhere. The funny thing about the bed is that Scarlett seems to think that it is for her to fill up with all of her toys. I put her to bed in her room and by the time Kevin and I make it to our bed she has snuck in and taken over... She is very sneaky, must get that from her dad. The next morning I asked her where we were supposed to sleep and she said I should sleep in her toddler bed and daddy doesn't need to sleep. Gotta love the perks of co-sleeping! 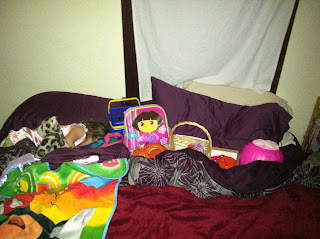 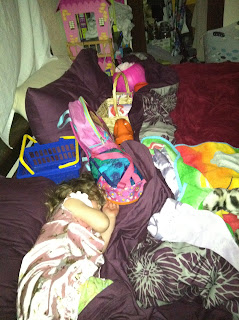