Ava had a major melt down tonight. According to her it was the worst thing that has ever happened to her in her entire life, I mean earth shattering.

We got a Wii from Santa for Christmas and  this cool zoo game where you make your own zoo and care for the animals. She has almost mastered it filling it full of critters. She was so close to being an animal whisperer, which is a huge accomplishment. I am afraid to count the number of hours she has invested in this game. You can see where this is going...

Right before we sat down for dinner she asks me to get her game back. I said "Where did it go?" and that is when she began to freak out. Kevin attempted to find this game, but it was GONE. Ava said she clicked a button that looked like a trash can. Ava completely lost it and did a tail spin and screamed and cried all through dinner. Dinner was lovely with the sounds of Ava's cries setting the mood. I felt terrible for her as I know the feeling when your mid term is just about finished and the power goes out, and you were stupid enough to not save it. Or when our hard drive crashed and we lost 2 years of photos and video.

I told her that this is a life lesson. Occasionally bad shit happens and there is northing you can do about it. She had two choices. 1- Cry and freak out  2- Move on and make the best of it, make a new cooler zoo. After a harrowing dinner, she calmed down and turned off the water works. 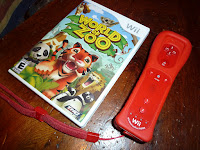 Guess what I spent the last hour doing?  I played the Zoo game and got her enough tokens to have a head start on her new and improved zoo.  The things we do for our children... 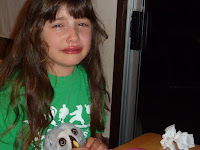 at January 12, 2011
Email ThisBlogThis!Share to TwitterShare to FacebookShare to Pinterest