Sometimes the mornings can be challenging, and I am saying that nicely. Most days we get out of the house just fine. But a couple mornings each week, Scarlett has her own agenda and it has nothing to do with mine.

Take this morning for example.  Scarlett chooses her clothes every day, I gave up that battle a long time ago.  She chose to stay in her Minnie Mouse pajamas but still needed a fresh diaper and pants. I let her choose her diaper which is just silly because they are all the same. Then I attempt to put it on her and she runs away. I dont have time to play the chase game so I hold her down and she screams bloody murder. She is too darn strong so Kevin has to help me hold her down to dress her. She is now having a fricken crazy freak out. Try brushing a toddlers teeth when they are spitting venom, its not easy.

Once I get her dressed I have to lock her in her car seat to keep her from taking off her clothes while I get the rest of our stuff ready for school. She screams the entire drive to school. Scarlett also holds a grudge. She was so pissed at me she wold not let me carry her or hold her hand as we walked to her classroom. Once inside she broke down and clung to me like a spider monkey. As I say goodbye she cries crocodile tears for me at the door. Crazy mornings suck...

After day care the suckyness continued right where it left off. I tried to change her exploding poop diaper and she fought every second of it. She squirmed like a fish and managed to get poop on her foot and on the changing table, so gross. At this point I am truly pissed off. She is stinky and has poop up the puss, or as Scarlett calls it poop octopus. I mange to clean her off and have to put her in her car seat yet again to restrain her while I got our stuff together to go to the bank.

Fast forward to bed time. After the tubby Kevin is getting Scarlett dressed  which involves putting lotion on her arm scar and slipping on her arm band. Of course Scarlett has to do it ALL herself. She gets a handful of lotion on her hand and instead of putting it on her arm, she lotions her vagina. I try to hold back my laughter but it leaks out. She is such a wacky, stubborn, strong willed little girl. She often makes me crazy mad, and then she will do something super cute or funny I cant help but smile. 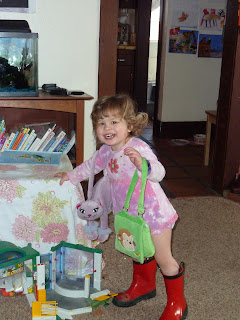 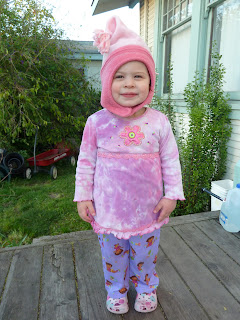 at March 30, 2011
Email ThisBlogThis!Share to TwitterShare to FacebookShare to Pinterest