I planned a wonderful outing for the day. Ava had a new friend over and I was determined to get out of the house and do something fun. I took my brood and dog to Delaveaga park which has hiking trails and a golf course. I was excited to do something different and was ready for a new adventure. Taking all my kids and dog anywhere is in adventure in itself.

Our journey started on the wrong foot as the main road was closed, so I figured we would enter through the other side of the park. We found a parking spot, got out the double stroller, snacks, water, kids, dog and went on our way. We had a map and even checked in with a woman at the help kiosk who showed us how to get to the nature trail.

We were on the trail for about 3 minutes when Ava screamed "Owe!!" She pulled up her shirt and grabbed what I thought was a spider and then realized it was a wasp. She threw the smashed wasp and began to scream way too loud. As I was trying to calm her down I heard Scarlett scream and start crying. I then realized what was happening as I looked up and saw all these little insects flying swarming us. Angelina yelled its a wasp nest and Ava began screaming even louder followed by Scarlett's cries to which I yelled "RUN!!"

Angelina started to run back the way we came and I yelled "not that way" and she did an about face and ran followed by Ava, Scarlett and Daisy. I attempted to run the jogger on the skinny root infested trail and poor Willa was getting bounced around like a rag doll. My girls were crying and after 40 yards began to walk when I yelled "Keep going their chasing us!" The Wasps were following us, I felt them banging into me. The girls kept running and I did my best to follow with the wide double jogger on the teeny hiking path.  The path was so bumpy and full of roots I had to go backwards for some of it because I couldn't manage to push it over the rough path and there was a big drop to my right.  Somehow Daisy got off her leash and took off at a full sprint.

Willa was fussing as the jogger was bouncing crazily down the trail and Scarlett was crying and wanted to get into the jogger but I could barely push it at my running pace so I began to walk. At this moment Willa lets out a big owie scream. I tell the girls to keep running and stop the jogger and pull Willa's jacket off. I see the broken wasp stuck in her neck and pull out the stinger and she cries uncontrollably. Sadly I cant stop to comfort her but take off running after the rest of the kids as she frantically cries and tries to pull herself out of her harness.

After a few minutes of running we start to walk with the goal of getting off this trail and finally find a slope we can clamber up that drops us off at the green on the golf course. We immediately meet a golfer who warns us to watch our for balls, the green is not safe and we should not be walking there. I tell our story and he backs off and points us in the direction of the road. We head off at a run through the green, happy to face a rogue golf ball over a wasp nest.  About 4 irritated golfers later, we make it off the green to the road and finally return to the car.

Scarlett had 3 stings! Ava and Willa each had 1 and luckily Angelina and I lucked out, no stings. Not sure how this stuff happens but this was definitely a nature hike gone wrong. We high tailed it out of there and went and got ice cream. 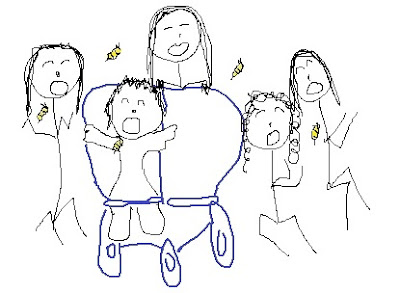 at August 01, 2013
Email ThisBlogThis!Share to TwitterShare to FacebookShare to Pinterest