Ava and I have awaited this day for a while now. I was naive enough to assume James Durbin would win American Idol and for sure make the final three. In my opinion he was and is the best on the entire show. When we found out he was eliminated on Wednesday night we were both shocked and sad.  Surprisingly, American Idol gave him the ok to do his Santa Cruz homecoming show. 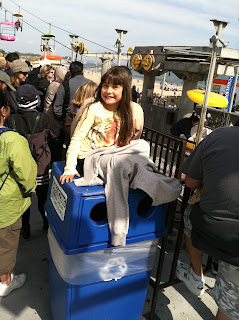 Kevin drove us close to the boardwalk and we walked the rest of the way.  We were over an hour early but it was already extremely crowded. Luckily, we found a great spot up on the upper level where Ava could sit on top of a recycle bin. Right when we get settled in, the security told everyone on the top level that they were not allowing any more people in, so we could not leave.

We patiently waited for an hour and a half for his arrival. It was a truly awesome moment. I know this sounds so cheasy but I could feel the unity of Santa Cruz in the air. So many people of Santa Cruz flocked to the boardwalk to support out local inspirational rock star.

I was proud to take Ava to her first concert of her life. We had a memorable time and are forever James Durbin fans.   Here are the three songs he sang. He is such a gifted artist!

at May 15, 2011
Email ThisBlogThis!Share to TwitterShare to FacebookShare to Pinterest